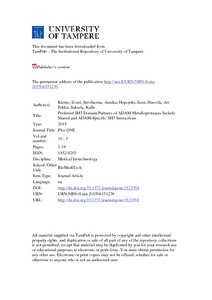 A disintegrin and metalloproteinases (ADAMs) constitute a protein family essential for extracellular signaling and regulation of cell adhesion. Catalytic activity of ADAMs and their predicted potential for Src-homology 3 (SH3) domain binding show a strong correlation. Here we present a comprehensive characterization of SH3 binding capacity and preferences of the catalytically active ADAMs 8, 9, 10, 12, 15, 17, and 19. Our results revealed several novel interactions, and also confirmed many previously reported ones. Many of the identified SH3 interaction partners were shared by several ADAMs, whereas some were ADAM-specific. Most of the ADAM-interacting SH3 proteins were adapter proteins or kinases, typically associated with sorting and endocytosis. Novel SH3 interactions revealed in this study include TOCA1 and CIP4 as preferred partners of ADAM8, and RIMBP1 as a partner of ADAM19. Our results suggest that common as well as distinct mechanisms are involved in regulation and execution of ADAM signaling, and provide a useful framework for addressing the pathways that connect ADAMs to normal and aberrant cell behavior.