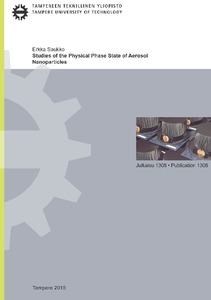 Aerosol particles produced in the atmosphere have major effects on the life on Earth: cloud formation starts on seed particles, often formed by photochemical oxidation of biogenic volatile organic compounds; visibility, corrosion, and health problems are caused by anthropogenic hydrocarbon and sulfur emission processed into particles by the atmosphere and the sun.

Naturally occurring secondary organic aerosol (SOA) particles can produce up to a half of the non-refractory mass of aerosol particles of less than micrometer in size. This makes SOA a large contributing factor to the climate system of the Earth. The actual effect that these particles have is, however, not well known, compared to the other effects affecting the climate. The research effort to increase the understanding and reduce the uncertainties around the climate effects of SOA encompasses an interdisciplinary research community.

The recent advance made by the observation of a solid phase of SOA by Virtanen et al. (2010) was the starting point for this thesis. The solid phase of SOA particles means that a long-held assumption of a partition equilibrium between the condensed phase and the gas phase of the semivolatile species may be wrong and produce too low a timescale for the particle chemical reaction rates and uptake coefficients.

This work consists of new developments in the instrumentation of particle properties as well as new observations of laboratory-generated secondary organic aerosol. The method development has two branches, one concentrates on finding more information from the measurement signal of an electrical low pressure impactor (ELPI) used in a somewhat unconventional way, whereas the other consists of a new detection method for particle bounce and response to different humidity and phase hysteresis induced by a carefully controlled humidity history.

The methods and observations made during this work are by no means the final word on the subject, but they are being used and further developed by the scientific community. Study of the particle phase and bounce as well as SOA mechanical properties and kinetics is well underway, and its results will be used to further refine the understanding of both aerosol fundamentals as well as the climate system.