Implementation of data synchronization over a challenged network 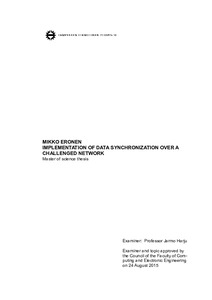 This thesis is related to the trend of the industrial internet of things. There exists a fair number of product and service examples where a manufacturer has a need for usage data harvesting. The gathered usage data can be used, e.g., in product development. In this thesis the product is mining equipment and its maintenance.
Sending the data straight from the mining equipment to the manufacturer is problematic, since mines often lack Internet connection. In some cases mines have local area networks, but in other cases those are not available. The only method of gathering the data can be transportating via USB flash drives or similar. The way the data is moved with the flash drive from the mining equipment to a location with Internet connection is called aided mine network. This location can be, e.g., an office building near the mining area. The core problem of the thesis is the gathering, moving, and synchronization of the usage data using the aided mine network.
In this thesis, a plan to implement the gathering of the data is developed. The solution is called DATAMiNe, i.e., Data Aggregation Through Aided Mine Network. The network consists of three parts. The parts are a Manager, an Edge Relay, and a Data Aggregator.
DATAMiNe's architecture is designed so that it supports an easy replacement of the aided mine network. Replacement can be a local area network, or an integrated Internet connection in the mining equipment. A communication protocol between the Manager and the Edge Relay is designed so that it supports the special needs of the aided mine network.
The development of DATAMiNe starts with an initial plan, which bases on the mining equipment manufacturer's vision, and use cases about unified data gathering into a single Data Aggregator. DATAMiNe is developed by ordinary software design methods, by programming a proof of concept test software, and finally by verifying a protocol with the Spin tools. With Spin, it is possible to formally check the interaction between connected state automata. All development steps play a part towards the next implementation phase. That is, the production implementation. The verification model forces attention to the details that otherwise would be ignored in the design phase. The test program implementation helps to choose the cost effective ways in the design.