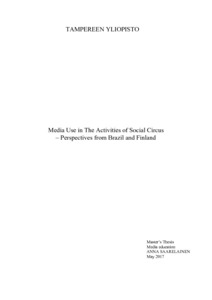 The aim of this master s thesis is to describe and to understand the media use in social circus activities. Aspects concerning the media use in this context were studied, analyzed and explained using Hasebrink s (2012) definitions concerning the media use in general. This is a qualitative comparative case study that is motivated by the idea of media pedagogy and social circus as evolving social phenomena which share similar objectives. In addition to the framework of media educational research, the theoretical, methodological and pedagogical approach of social circus, play significant roles in this study.

This study was conducted in Casa de Cultura e Cidadania, Novo Hamburgo, Brazil and Sorin Sirkus, Tampere, Finland. The study material consists of the answers from 15 qualitative inquiries that were personally given to the professional social circus trainers in Brazil and in Finland, participatory observations and altogether four thematic personal interviews that were conducted in both case organizations, Casa de Cultura e Cidadania and Sorin Sirkus. A qualitative thematic content analysis was utilized for analysing the media use in the social circus activities.

According to this study, media is present today also in the activities of social circus; in clothing, speech, face-to-face gaming, et cetera. In Finland, which is known from its technological opportunities, the use of media equipment during the activities of the social circus by the trainers (when having access to the equipment) seemed to be almost non-existent according to the whole study data. In Novo Hamburgo, for example music from the Internet was used during the lessons, not just in the final shows, and computer was used during the lessons for different reasons.

This study locates three main themes, and eight reasons, for media use in the activities of social circus. One of these themes includes media pedagogical approaches. Following the findings of this study, media could also be used to enhance participation. In the future we will be dealing with a myriad of new factors when talking about media use in the social circus activities, so it is necessary to start applying media education to the educational programs for social circus trainers.