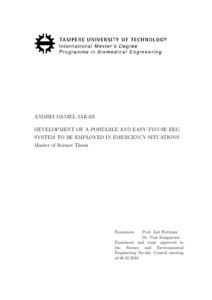 Master's Degree Programme in Biomedical Engineering
This publication is copyrighted. You may download, display and print it for Your own personal use. Commercial use is prohibited.

This thesis describes the development and evaluation of two portable devices intended for the recording of the electroencephalogram (EEG) in emergency situations. The topic originated from the EEG in Emergency Medicine (EEGEM) project, which seeks to develop the necessary technology and methodology that will help reduce the cost, the preparation time, and the overall complexity associated with EEG nowadays. The work contained herein builds upon the results obtained during previous Master theses that were completed in this project in order to obtain two systems that can be used in to investigate the feasibility and clinical value of EEG in emergency medicine (EM).

Before starting the work, a thorough investigation of the EEG signal, which included its origins and its diagnostic potential, was carried out. Existing instrumentation was analyzed as well as factors that influence the quality of the recording. Since the EEG is an established diagnostic tool, it was necessary to follow existing recording guidelines. The recording guidelines of the American Clinical Neurophysiology Society (ACNS) were summarized and employed in the design stages of this study. A review of commercial EEG recorders and quick application EEG caps revealed the absence of an integrated solution for recording this signal in EM.

Two systems were developed, one that is able to measure 1 channel of EEG while the other can measure six. The 1-channel system's particularity is that it allows a person's EEG to be displayed on a standard electrocardiogram (ECG) monitor. It features a high input impedance, low noise amplifier that increases the EEG signal's amplitude in order to allow it to be displayed on an ECG monitor. The amount of amplification is dynamically adjusted depending on the peak-to-peak amplitude of the EEG signal. After every gain change, the EEG recording is temporarily interrupted and a sinusoidal signal with an amplitude equivalent to 100 μV at the current gain level is outputted. The user interface is made up of a red, green and blue (RGB) light-emitting diode (LED) unit and a capacitive button that starts/stops the recording.

The 6-channel system interfaces with a computer and consists of three parts: a wire-less EEG (WEEG) recording device, a quick-application cap, and recording software that runs on a computer. The WEEG device is able to measure 6 channels of EEG and tri-axial acceleration for the identification of movement artifacts. The recorded data is transmitted to a measurement computer by means of a 2.4 GHz wireless protocol. The author worked with the group from the Department of Automation Science and Engineering (ASE) that developed the previous versions of the device in order to reduce the size of the system and to improve its integration with the measurement computer.

An initial prototype of a quick-application electrode cap for out-of-hospital measurements that can be performed by non-EEG specialists was designed by M.Sc. Salmi. It was made up of easily sterilizeable materials that were also elastic. Due to its many straps and adjustment points as well as the floating electrode leads, the band was not easy to apply. This study reports a simplified version of the cap that possesses only two attachment points and can be easily applied even with the patient in the supine position. Also, in the present version, the electrode leads are firmly attached to the cap.

The past version of the recording software, which was developed by M.Sc. Pänkälä, had only basic functionality. It displayed the EEG signals, stored them, and allowed the WEEG device to be configured and patient information to be saved. Digital low-pass filtering of the displayed data, the ability to control the vertical sensitivity as well as the time scale, automatic uploading of the recorded file, and an implementation of the aEEG algorithm were added during this thesis. Also, information about the recording can now be stored together with the recorded signals. Furthermore, the software's us-ability was improved by means of a simple graphical user interface (GUI), which makes all functions easily accessible.

During the evaluation of the two prototype systems, the electrical and software performance were ascertained. In the electrical tests, the operating time of the device, the common mode rejection (CMR), the frequency response, the noise level, and the signal to noise ratio (SNR) of the two systems were measured. In order to assess the reliability of the software of the two systems, both static and functional tests were conducted.

The results obtained from the testing of the systems indicate that they offer similar performance to those offered by commercial EEG recording systems. This demonstrates that they can be used to investigate the clinical indications of EEG in EM. /Kir11