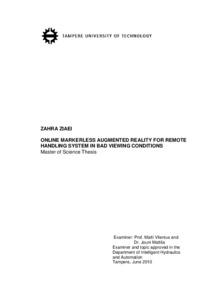 This thesis studies the development of Augmented Reality (AR) used in ITER mock-up remote handling environment. An important goal for employing an AR system is three-dimensional mapping of scene that provides the environmental position and orientation information for the operator.
Remote Handling (RH) in harsh environments usually has to tackle the lack of sufficient visual feedback for the human operator due to limited numbers of on-site cameras and poor viewing angles etc. AR enables the user to perceive virtual computer-generated objects in a real scene, the most common goals usually including visibility enhancement and provision of extra information, such as positional data of various objects.
The proposed AR system first, recognizes and locates the object by using the template-based matching algorithm and second step is to augment the virtual model on top of the found object. A tracking algorithm is exploited for locating the object in a sequence of frames. Conceptually, the template is found in each sequence by computing the similarity between the template and the image for all relevant poses (rotation and translation) of template. The objective of this thesis is to investigate if ITER remote handling at DTP2 (Divertor Test Platform 2) can benefit from AR technology. The AR interface specifies the measurement values, orientation and transformation of markerless WHMAN (Water Hydraulic Manipulator) in efficient real-time tracking. The performance of this AR system is tested with different positions and the method in this thesis was validated in a real remote handling environment at DTP2 and proved robust enough for it. /Kir10