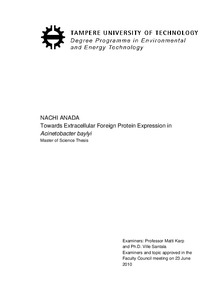 Acinetobacter baylyi is a soil bacterium which has been known for unique biological features and metabolic pathways. Particular interest has been paid to A. baylyi ADP1 strain to study metabolism due to their high competence with natural transformation. The ability of natural transformation in ADP1 is also found in B2T wild-type strain; therefore, this study focused on heterologous gene expression in B2T wild-type strain.

Foreign proteins expressed in this study were Bacillus stearothermophilus α-amylase and yellow fluorescent protein Citrine. The putative fusion partner proteins were co-expressed with Citrine for studying extracellular expression in A. baylyi. The level of expression was studied by measuring enzymatic activity and fluorescence signal.

α-Amylase was successfully expressed and produced in A. baylyi; though its enzymatic activity level was not high due to the weak promoter used in the plasmid construction. The Citrine fusion protein expression resulted in high fluorescence signal detection in intracellular parts, but not in extracellular parts. This result showed that extracellular expression of Citrine using the selected fusion partner proteins was not observed in A. baylyi. The high fluorescence signal was remained up to 72 hour incubation when the cells were grown in optimal growth medium; therefore, fluorescent proteins could be used as reporter genes in the fusion gene construction in A. baylyi. /Kir10