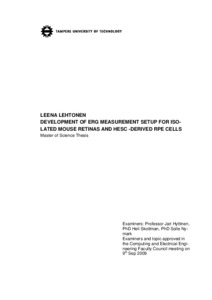 This thesis studies a new possible method for testing the functionality of human embryonic stem cells (hESC) that are differentiated into retinal pigment epithelium (RPE) cells by using electroretinography (ERG). RPE is a cell layer that is situated behind the neurosensory retina at the back of the eye. The main function of the RPE is to support the light sensitive photoreceptor cells of the retina. ERG is a commonly used method for evaluating the functionality of the retina electrophysiologically. In ERG, a light stimulus is given to the retina and an electrical response to the stimulus is recorded. RPE functionality can be seen in the ERG signal in different ways: 1) the presence of the cwave, which is generated in the RPE, 2) increased amplitude of the b-wave when recovering from light adaptation and 3) ability to record light responses longer than without the RPE, because a functional RPE helps the retina to retain its viability.

A literature review is done to evaluate the theoretical possibilities for developing a functionality test for hESC-derived RPE cells that is based on ERG. The idea is to bring a mouse retina in contact with a layer of hESC-derived RPE cells and record the effect of the RPE with ERG. Based on the review, no such test has been done before. However, it has been studied that RPE cell layer forms contacts with the retina even after the two have been detached and then reattached, and this can be registered with ERG measurement. This indicates that the hESC-derived RPE cells could behave similarly.

A measurement setup is developed for measuring light responses first from isolated mouse retinas alone and later from mouse retinas together with hESC-derived RPE cell layers. The ERG measurements are done with a microelectrode array (MEA) system (Multi Channel Systems, MCS GmbH, Germany). The development of the system included designing a light stimulator, finding a suitable way for performing the tissue preparation and the measurements in darkness as much as possible and constructing a functional method for a short term culture for retina-RPE complexes.

The functionality of the measurement setup developed is evaluated by the recorded responses. The recorded light responses of the isolated mouse retinas were good even though an undesired artefact caused by the light stimulator is present in the signals during stimulation. In the measurements from retina-RPE complexes the light stimulator was replaced with a monochromator so that the artefact is not present in the responses. Even though responses to light could be recorded, the stimulus intensity appeared to be too small to gain good responses.

The measurement setup developed was found to be functional. Based on these measurements the functionality of the hESC-derived RPE cells could not yet be evaluated, and further development of the setup especially with the light stimulation is still needed. However, the results were promising and this kind of an approach for testing the functionality of the hESC-derived RPE cells might work also in practice. /Kir10