Modelling of extended Endplate Connection in Ambient Temperature and Fire 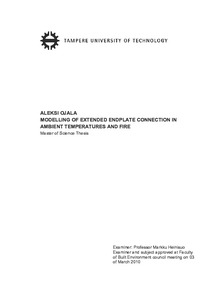 In this study simulations were done to acquire data on 3D and fire behaviour of an ex-tended endplate joint, and to evaluate the suitability of the FEM software SAFIR on modelling 3D beam to column joints. Three cases were modelled, two with simplified joints in ambient temperature, and one with half of a frame modelled in fire condition. The simple joints were loaded with moment to strong (vertical) direction, and moment to the weak (horizontal) direction. The half frame was loaded with a constant load and subjected to a standard fire. The results of these simulations were compared with the component method calculations according standard EN 1993-1-8 (2005) for simplified model, and with the test data from the test done at the University of Manchester (Wang et al 2008) for the half frame model. Notes on modelling and sources of error are discussed in conclusions. /Kir10