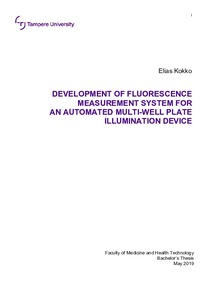 During fluorescence, a substance emits light after it has absorbed photons from an excitation light source. The emitted fluorescent light has a longer wavelength than the absorbed light. This phenomenon is utilized extensively in a variety of applications, such as in fluorescence labelling in in-vitro studies and as a diagnostic tool in ophthalmology, due to being a non-destructive and a highly sensitive approach.

The results of the experimental part of this thesis showed that with the constructed measurement system, it was possible to measure fluorescence emission from the prepared samples. In the light of this, the targets set to this bachelor’s thesis were accomplished and the product development of the fluorescence measurement system has proceeded from a design phase to an early prototype phase. In future development, the system can be further improved by reducing the amount of excitation light detected, and by enhancing the collection of fluorescence.