Vibration of a Tall Building under Wind Incidence 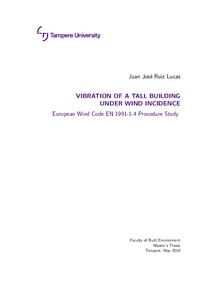 In this thesis, a study is made about the correction and precision that EN 1991-1-4 has in the determination of vibrations in buildings induced by wind loading. A comparison is made between the existing procedure in the European Wind Code with respect to the rest of the most relevant wind codes and standards. In addition, the acceleration produced in tall buildings due to the incidence of wind EN 1991-1-4 determination procedure is studied. The CAARC Standard Tall Building is selected for the study because its dimensions and properties are known and standardized.

The study is carried out with the intention of making two main comparisons. The first is regarding to the treatment used by the European Wind Code about the two existing cases of wind incidence on buildings: the case with vertical correlation and the case with horizontal and vertical correlation. The latter is the most approximate representation of what happens in the reality of wind incidence on a building. Thereby, the second comparison developed is in order to obtain the acceleration through EN 1991-1-4 and by means of an FEM analysis.

It is concluded that there is a possibility of standardizing a wind code among the main countries mainly related to the along-wind vibration similar approaches. However, the results about the European Wind Code are satisfactory concerning the differentiation that it presents in relation to the two cases of horizontal correlation of the wind loads incidence discretized by the aerodynamic admittance function. Finally, there was an enormous parity noted in the acceleration results obtained by means of the FEM analysis with respect to those approved by the code, granting consistency, precision and verisimilitude to its established procedure. This study is expected to lay the groundwork to further research where the variables considered and examined in this analysis are altered.