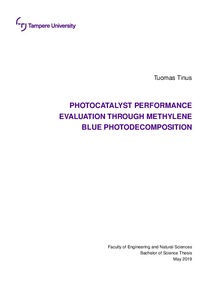 Science and Engineering, BSc (Tech)
Tekniikan ja luonnontieteiden tiedekunta - Faculty of Engineering and Natural Sciences
This publication is copyrighted. You may download, display and print it for Your own personal use. Commercial use is prohibited.

One widely used and effective way to measure the performance of a photocatalyst is indirectly with help of methylene blue, which readily photodecomposes in presence of a catalyst. Methylene blue is cheap and readily available from suppliers, and measuring its decomposition rate is simple due to its high absorbance in visible light range. Such indirect method does allow rapid iteration and improvement on existing photocatalysts by providing a way to qualitatively grade their efficiency without the need to go through i.e. complex water splitting measurement.
In this work, method for evaluation of performance of particulate photocatalysts based on photodecomposition of methylene blue is established. First, physics of light absorption and a method of determining concentration from light absorbance with Beer law is discussed, and methylene blue decomposition mechanism as well as experimental considerations reviewed. After that, equipment and methods for measurement of absorbance and determining methylene blue concentration are discussed. Then, research methodology, equipment and samples used are described, and finally results of the measurements and their analysis presented. The measured absorbance spectra during decomposition have deviated from the linear decrease predicted by theory, finding the source of the non-linearilty has, however, been left outside the thesis scope. A new model was developed, correlating the non-linear absorbance at 635 nm to concentration with help of a secondary absorption peak at 290 nm.
The final model for methylene blue decomposition shows reasonable agreement with theory, the decomposition profile is as Langmuir-Hinshelwood reaction mechanism predicts that of an exponential decrease. Catalysts under evaluation are clearly distinguished from each other, allowing the desired quantitative comparison between their activities which the method is designed to show. Core-shell catalyst with a photoactive layer of TiO2 ALD grown on the surface of quartz particles at 100C is shown to have significantly lower photocatalytic efficiency than one with TiO2 grown at 200C. However, significant error is clearly present in the low concentration range, which can in future work be eliminated by improving the calibration data set used to relate absorbance at 635 nm to methylene blue concentration and eliminating the original non-linearity source.To conclude, the method outlined in this work could effectively be used for quantitative comparison of photocatalyst activities of particulate photocatalysts and be used in research and development of photocatalyst materials.