The bending, shear and torsion resistances of partially protected beams in fire 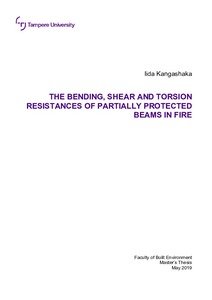 Intumescent coating is often used as fire protection on steel members due to its attractive appearance and how easy it is to apply. In some cases, the member can be only partially covered. Examples of these cases are when the member is coated on site, but a structure has been installed adjacent to the member before the coating happens. Other examples are when the member has been fully coated but the coating is damaged or when a secondary beam is joined to the studied beam on its span and the joint is left unprotected.
The previous research on this subject has mainly been about the increase in temperature caused by the unprotected part of the beam. To address this, Hautala et al. conducted a simulation study on the bending resistance of a partially protected IPE 200 beam in fire. This thesis aims to expand on their results and produce heating time-resistance curves for bending, shear and torsion to aid in designing steel structures.
FEM models are made to determine the bending, shear and torsion resistances of partially protected IPE 200 and HEA 200 beams during fire. The models are made for fully protected, partially protected and unprotected beams so that the results can be compared. The expansion of the intumescent coating is not explicitly modeled but is taken into account by using an effective thermal conductivity. The temperature results are validated using experimental and simulation results from previous research.
The results were bending, shear and torsion resistance curves as functions of the heating time. They show that additional intumescent coating of the partially protected beam mainly affects the resistances in the middle of the fire when comparing to the unprotected beam.