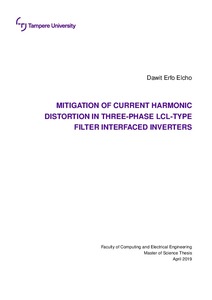 It is a common practice to use an LCL-filter to attenuate the high-frequency harmonic distortions in grid-connected converters to stay within the limit set by different harmonic limit standards. However, to deal with low-order harmonics, optimal ac current-control techniques are preferred as they are cost-effective solutions. Several previous studies showed that whether LCL-filter is damped actively or passively causes more losses. Moreover, it increases the cost and design complexity of the system since LCL-filter introduces new state variables in the dynamical model compared to simple an L-type filter. Thus, harmonic mitigation under distorted and unbalanced grid conditions in LCL filter interfaced inverters is still an open research topic.

In this thesis, two current-control techniques: proportional-integral (PI) and proportional-resonant (PR) controllers for current-fed passively damped LCL-filter interfaced grid-connected inverter are examined. Inverter-side current-control is adopted in LCL-filter interfaced inverters to have a safe operation. However, the presence of the harmonic distortion in the grid-side cannot be adequately compensated under sever grid conditions. Thus, it is necessary to adopt proportional grid-voltage feedforward in dq-domain and capacitor-current feedforward in αβ-domain to inject pure sinusoidal currents to the grid. Moreover, the conventional synchronous reference frame PLL (SRF-PLL) that generates the angle and frequency for the current controllers lacks the capability to suppress high disturbance under unbalanced and distorted grid voltage conditions. Hence, the scarcity of the SRF-PLL to attenuate disturbances is reduced by introducing a prefiltering stage that utilizes delayed signal cancellation (DSC) techniques.

Based on the techniques mentioned above, the harmonic content of the grid-side current was kept below what standards recommend. The feedforward terms in both domains showed an excellent performance in suppressing the low-order harmonics from the grid-current in distorted grid voltage case. There were also some crucial differences in the performances of the current- control techniques. Enhancements on the quality of the grid current were also made by utilizing αβCDSC-PLL and dqADSC-PLL in distorted and unbalanced grid voltage conditions, respectively. The operation and performance of the two current-control methods were verified by experimental results from the laboratory test bench at Tampere University Hervanta campus.