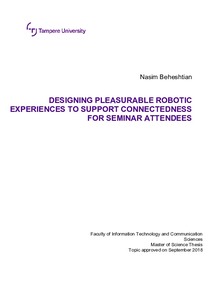 People attend seminars to get to know other individuals in the field and gain expert knowledge while networking and socializing. Although networking is beneficial to build a relationship with others, some people find it to be challenging. The challenge is in the fact that not everyone contributes to conversations or they are too shy to approach strangers and break the ice.
There are different ice-breaker solutions developed to make the process easier for event attendees to socialize with unfamiliar people. For example, there are wearable technologies available that use proximity sensors to connect people with similar interests at events. Mobile phone applications are also very popular to use and make it possible for event attendees to connect before or after events. Similarly, interactive tabletops can also be ice-breakers and assist people to connect through multi-user interactions. However, social robots have not been studied in event context, although previous work has shown that they can be used as facilitators and mediators for connectedness in general.
In this thesis, we have used a social robot called Pepper to study how robots can act as facilitators of social connectedness among strangers at events and create pleasurable and positive user experiences for event attendees. While there has been few earlier research in social connection using virtual assistants and social robots, physical social robots have never been studied as facilitators of connectedness at events.
In order to identify if social robots can act as facilitators of connectedness, and create pleasurable and positive experiences for seminar attendees, we have conducted a pilot study and two field trials with overall 55 participants. In our pilot study (n=12), our goal was to gather feedback from university staff and students on the topic of social robots as facilitators of connectedness. In the field trials, we gathered information and feedback from the target users on the two concepts we implemented in the Pepper robot to address their needs and requirements. The concept for the first field trial was a Welcoming application to give information on the seminar. And the second concept for the second field trial was a simple two player game for event participants to play and connect to each other. In the first field trial (n=31), we took insights from our pilot study and conducted a field study with seminar attendees to gather feedback from the real users on a Welcoming application. For the second field trial (n=12), we created a prototype of an interaction concept called Color Game based on the feedback gathered from the earlier studies, and evaluated it at an event. The empirical research of this thesis includes surveys, interviews, and observations through qualitative and quantitate methods of data gathering and analysis.
The findings suggest that social robots have the potential of becoming facilitators of connectedness at events, and participants had mostly positive and pleasurable experiences evoked by social robots and concepts during the events. Social robots can become acceptable ice-breakers at events by providing the attendees with fun and entertaining activities, such as games. Most participants expressed having fun and joyful interactions with the robot, and their experiences with the evaluated applications were positive . Positive experiences made it possible for attendees to accept social robots as ice-breakers and as means to connect and become familiar with strangers during events.
Although in the study we found out that the majority of participants were interested in social robots, it is important for robotic platforms to follow certain guidelines to create better interactions and experiences for users. Thus, we have created a list of design implications which can be used for future developments of social robotic as ice-breakers at events, and also to contribute to the field of human-robotic interaction.