Design and Control of a Wall-climbing Rocker-bogie Robot 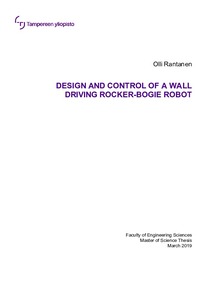 Automaatiotekniikka
Tekniikan ja luonnontieteiden tiedekunta – Faculty of Engineering and Natural Sciences
This publication is copyrighted. You may download, display and print it for Your own personal use. Commercial use is prohibited.

Wall-climbing robots have been developed for decades for different inspection, surface finish and research purposes. However, there are still limitations in traversing on, and between, different surfaces. Many robots are either limited on smooth surfaces or may not be able to cross obstacles due to low ground clearance. Rocker-bogie suspension has proven its capabilities on multiple planetary rovers developed by NASA. The system is simple and provides a large trajectory and good steering capabilities. Therefore, it would be interesting to research whether the suspension capabilities could be implemented in a wall-climbing robot.

The aim of the thesis was to identify design features affecting the design process of a wall-climbing robot with ability to move on different surfaces and cross obstacles. In addition to this, three different adhesion method concepts were developed, which were compared using the criteria identified. The method seen as the most suitable was used to develop a prototype robot and the performance of the robot was tested with empirical experiences.

The most important factors for robot performance are seen the ability to attach to the surface it is moving on, and the ability to climb and avoid different obstacles. Rocker-bogie suspension ensures the ability to move and cross obstacles, but on vertical surfaces an adhesion method is required to work together with the suspension. The robot prototype is combining the chosen adhesion method to rocker-bogie suspension. The locomotion and adhesion capabilities on inclined surfaces were tested. The adhesion was found to be insufficient for vertical surfaces due to lack of power, but the prototype robot is capable of moving on inclined surfaces it wouldn’t be able to without any additional adhesion.