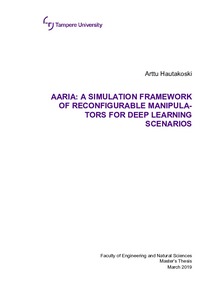 Automaatiotekniikka
Tekniikan ja luonnontieteiden tiedekunta – Faculty of Engineering and Natural Sciences
This publication is copyrighted. You may download, display and print it for Your own personal use. Commercial use is prohibited.

This thesis presents a simulation platform called Aaria. The purpose of Aaria is the generation of synthetic movement data for machine learning applications in robotics. The goal is to learn deep features that are common to the robotic structures so that the solution could generalize to all robots regardless of mass or structure. This thesis also discusses the literature about reconfigurable mechanisms, system parameter identification, human activity recognition and synthetic data. The descriptions of the components of a convolutional neural network are also included in this work along with the network architecture used in the presented machine-learning task.
The modular structure of Aaria allows it to generate any kind of open chain manipulator with a maximum of six degrees of freedom defined by modified Denavit-Hartenberg parameters. One of the advantages of Aaria is its ability to generate randomized structures and thus generate a wide variety of time series data. Time series data can be considered as one-dimensional images, which makes them a suitable data type for convolutional neural networks. Multiple time series can form a two-dimensional structure similar to images. This kind of two-dimensional time series dataset can be used as training data for learning deep features of robotic structures. In addition to being able to generate random strictures, Aaria can also be used to simulate and gather data from specific structures.
Some of the generated synthetic data was used in a machine-learning task to estimate the lengths and masses of swinging structures based on input torques and rotation angles, velocities and accelerations. The results were promising with 2.5 % mean relative error for both length and mass.