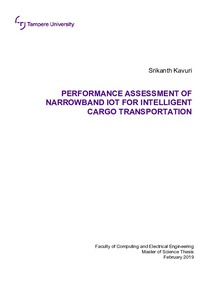 Narrow Band Internet of Things (NB-IoT) is the most advanced technology standard for short message services, such as sensor data, developed by 3GPP Release 13 and beyond. The NB-IoT is deployed over Long Term Evolution (LTE) Advanced Pro infrastructure and theoretically, it offers extended coverage up to 40 km from the base station. The objective of this thesis is to analyze the performance of NB-IoT technology in cargo shipment tracking using LTE cellular networks across the coastal line. Currently, about fifty thousand cargo ships use onboard Satellite communication system for all sorts of information exchange with the onshore data centers. The Satellite communication will continue to exist, even after deployment of NB-IoT.
Apart from the machine critical data of the cargo ships, the non-emergency periodic short messages for polling meteorological and container metadata such as temperature, humidity, gaseous detection, etc. will be crucial for the quality of the shipment and the traceability. In this thesis, we analyze deployment of NB-IoT sensors for cargo container to track and provide metadata about the condition of goods. We evaluate three implementation methods of NB-IoT for cargo ships, optimize the coverage and enhance the battery life of the sensor equipment. The main idea is to offload non-critical information that would otherwise use expensive Satellite links, thus embrace the NB-IoT technology at offshore and reduce the financial stress on the cargo shipments.
In the first method, all the sensors transfer the periodic data directly to the coastal LTE network when the ships sail in close proximity to the shore. In the second method, the sensors transfer data to an LTE base station installed locally on the ship and then accumulated information will be relayed to onshore LTE network over NB-IoT channel. In the third method, an Unmanned Aerial Vehicle (UAV/ Drone) base station will collect the data from the onboard sensors; it then relays the information to the onshore LTE network. For all methods, when there is no LTE coverage, the accumulated data will be sent over the Satellite link, which will be available onboard.
The assessment confirms the hypothesis that the packet loss probability reduces when the base station is located close to the sensor, where the number of retransmissions will be reduced, and more uplink resources will be available. For direct access scenario, a large number of users contend for Random Access Channel (RACH) simultaneously after entering into the LTE coverage. The packet will be dropped after reaching the maximum number of attempts for the RACH resources. As per the simulated results, mean lifespan of a sensor is greatly affected by the LTE network availability and random access procedure, during which the sensor spends most of the energy for transmissions. The mean transmit delay will be higher with second and third methods where the ship BS, UAV BS accumulate packets until they find the LTE network or relays the data to the Satellite link if the LTE outage is longer. This performance assessment provides technical insights for the maritime industry to embrace the NB-IoT for tracking and condition monitoring of shipment.