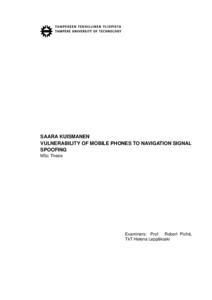 Positioning based on satellite signals is a key element in many mobile phone applications. The structure and contents of civilian satellite signals are public knowledge, therefore enabling anyone to create similar signals. If false signals transmitted to a receiver manage to mislead a receiver into making a false position fix, it poses a high security risk to mobile phone users. This is called spoofing. The goal of this thesis is to study the effects of navigation signal spoofing in mobile phones in the context of satellite based positioning.
To give sufficient background information to understand the effects of navigation signal spoofing, satellite systems, their signals and the basics of satellite based positioning are explained. This thesis discusses the basics of navigation signal spoofing and its different forms and effects. Anti-spoofing techniques in literature are surveyed. Several tests are conducted to assess the threat spoofing poses to mobile phones. Four Android phones are used in the tests as well as a more high-end receiver for comparison. Fake GPS signals are created with a GPS simulator and real satellite signals are transmitted to the receivers at the same time with lowered signal strengths.
The tests are conducted in a environment where no other signals, such as Wi-Fi or Bluetooth, are available to the receivers. The phones are also used in flight mode. Spoofing tests are done on both the pseudorange and data level.
Based on the tests it is found that while spoofing is not simple nor easy, it is possible and potentially dangerous with enough knowledge and the correct equipment. In most cases, the phones experienced at least some disturbance or a moved position fix. In 54 of the individual 144 tests (38%), spoofing was fully successful. Only in about 4% of the individual test results, no effect was noticed in the positioning.