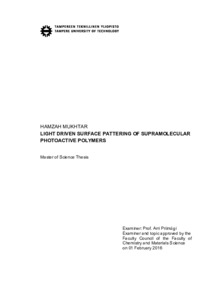 Azobenzene containing photo-responsive polymers have gained much attraction due to their reversible photoisomerization and the different types of photoinduced phenomena that can be induced by the photoisomerization process. Photoinduced anisotropy, for instance, is of much interest for potential applications in optical/holographic data storage and optical switching. Photoinduced surface pattering, the topic of this work, is studied for applications in diffractive optics and microfabrication.
In this work the aim is to systematically study the effect of (i) azobenzene concentration, (ii) the molecular weight of the polymer where the azobenzene are incorporated into, and (iii) different types of non-covalent bonds through which the azobenzene molecules are attached to the polymer, on the formation of photoinduced surface relief gratings (SRGs). As the polymer matrix, poly(4-vinyl pyridine) (P4VP) was used. For (i) and (ii), 4-hydroxy-4ʹdimethylaminoazobenzene, that forms hydrogen bond with P4VP, was used. For (iii), three azobenzenes and two non-covalent interactions (hydrogen bond and halogen bond) were compared. The purpose here is to compare the non-covalent bonding effects on the efficiency of the SRG formations and to determine the most efficient non-covalent interaction for azobenzene containing polymers, especially in the low concentration regime.
For all of the three azobenzenes studied, the polymer molecular weight ranged from 1kD to 7kD and a series of samples was prepared with different azobenzene concentrations (1 mol% to 10 mol%). The samples were prepared with spin coating and the SRG formation was carried out via interference lithography, and the dynamics of the SRG formation in different complexes was studied through real time diffraction measurement of a probe beam during the inscription process.
The hydrogen bonded complexes showed an increase in the diffraction efficiency with an increase in the azobenzene concentration and it is observed that the azobenzene concentration and the polymer molecular weight are inversely proportional in terms of their effect on the efficiency. On the other hand, from the comparison of hydrogen and halogen bonding, it is evident that the halogen-bonded complexes surpass the hydrogen bonded-complexes and create more efficient gratings even at the lower concentrations, which is important for future optimization of non-covalently functionalized azobenzene containing polymers.