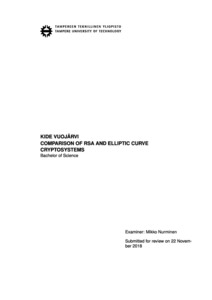 Tietotekniikka
Tieto- ja sähkötekniikan tiedekunta - Faculty of Computing and Electrical Engineering
This publication is copyrighted. You may download, display and print it for Your own personal use. Commercial use is prohibited.

The thesis was a literary review of two public key cryptosystems, RSA and elliptic curve cryptosystem (ECC). Its main focus was on their key generation as well as their use in key exchange and digital signatures, looking into the efficiency of these operations.

Elliptic curves provided the same level of security with keys that are shorter by an order of magnitude, but RSA had more generally usable encryption possibilities as well as more optimised implementations for digital signatures.

The results showed elliptic curves to have a significant edge against RSA in the future of public key cryptography, but RSA still outclasses ECC in digital signatures.