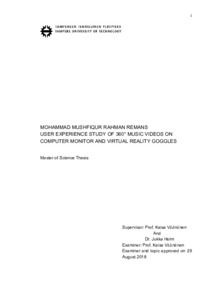 In the past few years, user experience has become a trend in the field of Human-Computer Interaction (HCI). The ultimate success of a product or service depends on delivering user experience as the user prefers. 360° video is an immersive technology that offers a new era of visual experience. People are using 360° videos in several sectors of their everyday lives, including media consumption such as music videos.
Nowadays, Virtual Reality (VR) and 360° camera hardware are becoming more usable, and 360° videos are also being produced to deliver realistic experience through both VR goggles and traditional displays. While producing 360° videos, the need of measuring user experiences also arises.
This study explores the user experience of 360° music videos along with how the users perceive multicamera 360° music videos through the computer monitor and the VR goggles. This empirical research was conducted in the form of a laboratory experiment with 20 test participants. During the within-subject study, participants watched four 360° music videos produced with four different cutting rates and shots and then evaluated them. Quantitative and qualitative data were collected through user evaluations and interviews. The data were also analysed both quantitatively and qualitatively.
The results indicated that a music video which was produced through integrating eight shots (average length of 26 s per shot) captured by four 360° cameras, delivered the highest quality user experiences on both computer monitor and VR goggles. The video which had the highest cutting rate (average length of 11 s per shot) delivered lowest-quality user experiences. Results also demonstrated that 360° music video which was produced by using a single camera delivered some boredom among the users because of its static view. The thesis is concluded by illustrating the findings of 360° music video user experiences based on user evaluation and interview data.