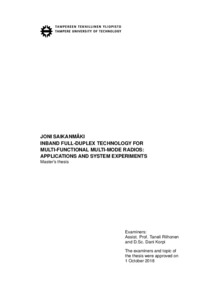 Sähkötekniikka
This publication is copyrighted. You may download, display and print it for Your own personal use. Commercial use is prohibited.

Radio transceivers are devices which send or receive electromagnetic waves for certain purpose. These devices are crucial in military domain for tactical communication and electronic warfare operations, and new types of technologies are continually being developed. Especially, inband full-duplex technology has potential as many military-related requirements can be covered by using this technology. This thesis discusses the emerging concept of a multi-functional radio with inband full-duplex capability that allows simultaneous use of multiple functionalities for tactical communication and electronic warfare. This is in contrast with legacy tactical radios that mostly make use of half-duplex technology, where only one functionality at the time can be enabled. Furthermore, this area has not been yet sufficiently explored in scientific literature.

Both defensive and offensive proof-of-concept experiments are performed to show the advantages of using a multi-functional radio that has inband full-duplex capability. In the offensive experiments, an inband full-duplex radio is used for jamming and intercepting an opponent on the same frequency band. The results show that the opponent's tactical signal quality decreases radically when jamming power is increased. However, increasing jamming power does not affect the full-duplex radio's own signal quality. In the experiments, several different jamming strategies, such as tune and barrage jammer are used. The same phenomenon can be seen in defensive experiments where the opponent tries to intercept tactical transmission between the full-duplex radio and its team's members. Due to this, the multi-functional radio with inband full-duplex capability can be exploited successfully in military environment.