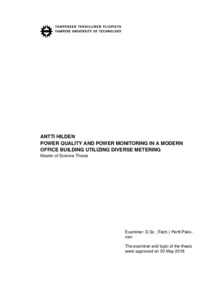 The monitoring and measuring of power quality and power is becoming increasingly important in distribution networks as a consequence of developing electricity markets, distributed generation and the proliferation of power electronics devices. The correct measurements and adequate monitoring result in an effective and secure supply of electrical energy. The studies of the thesis utilize the diverse measurements of the piloted modern office building expanding examination to low voltage distribution networks. During the study, the complete monitoring of the electrical energy system of the building was implemented and the measurements were analyzed focusing on their significant aspects.

The thesis consists of three parts considering the theory and practices of measuring, the implementation of the data acquisition system in the pilot building and the analyses of the measurements. First the concerns over power quality and power are discussed in conventional and modern cases and the principles of measuring and the quantities used are described. Also, the consequences of inaccurate power measurements and poor power quality are listed. Then the thesis continues with the introduction of the pilot environment and the ICT system comprising IoT- and Linux platforms. Finally, the measurements are presented by the means of a general overview and more sophisticated analyses of time averaging of power and distortion in current, voltage and power.

The analyses focus on total distortion and Fryze's power theory and provide an overview of the electrical behaviour of the building. In addition, various time averages are calculated for active, fundamental frequency reactive and Fryze's reactive power and, also, distortion in current and voltage and their combined effect on Fryze's reactive power are discussed. The time resolution of 1 second was utilized with the different types of loads and the solar power plant. The impact of the solar power plant and electric car charging was found to mainly relate to active power. Ventilation and tenants' appliances were observed to draw the highest distortion current, and thus affect the voltage distortion of the building confirmed by correlation coefficients and random forest method of machine learning. Time averaging of 1 minute was noted to conform with the averages of 1 second. The results indicate that Fryze's reactive power quantifies distortion relevantly and distortion current requires quantification in an absolute manner.