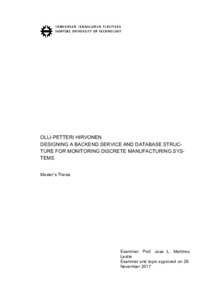 In industrial applications production monitoring is a vital part of its optimization. Our goal is to develop a system that will follow the flows of items through a manufacturing process and calculate different KPI-values for them. In this thesis the aim is to create a backend service for accepting the data, storing and preprocessing it before sending it to the frontend. The user interface or more detailed data-analysis are not part of the scope.
In this thesis different data models are inspected for storing the data and their perfor-mance is compared. Through a literature view Petri nets and directed graphs are selected as the main candidates. The theory and applications for both are studied. It is discov-ered that while Petri nets are more versatile they are also heavier in comparison to di-rected graphs.
Along this thesis an application is developed on basis of Insolution’s Inspector-software on which the directed graph is applied. With this the requirements from the company are reviewed, the most important of which are lightness and scalability. Also some decisions made with the development are explained.
There is also a simulated system developed for testing the data models with. A simple generator is implemented to produce events as they would come from a real system which are then stored into the database. This data is retrieved and processed using both data models and their durations are measured.
With the tests implemented, it is concluded that the directed graph performs slightly faster in most cases. It is also concluded that a Petri net offers more for modelling and control but for pure monitoring a directed graph is more efficient.