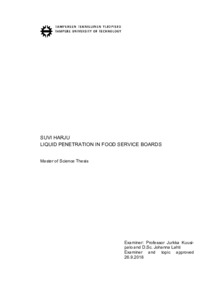 Raw edge penetration is a phenomenon where liquid is able to penetrate into the structure of paperboard through the raw edge. The objective of this thesis is to research the edge penetration phenomenon during the food service board making process. Another aim is to find proper test methods to measure edge penetration.
The literature part focus on the phenomenon and the factors which effect on edge wicking. The structure of paperboard, the edge penetration and the sizing state were studied in the experimental part. Sampling was executed in five stages of paperboard manufacturing and converting process in order to study the development of paperboard through the process. The same measurements were also made later to see the effect of time.
Development of internal sizing was discovered to have an effect on cold edge penetration test results. The best results were achieved after five weeks. The results of the tests can be determined both by visually measuring the penetration length or by calculating the changes in masses. The calculation is objective and therefore more useful method. Hot edge penetration was measured with two different tests, whose biggest difference was the cutting direction of samples. As an outcome of the study the samples should be cut so that the longer edge of sample is in machine direction.