Do it ourselves: Digital platform for self-organisation in urban planning - research through design 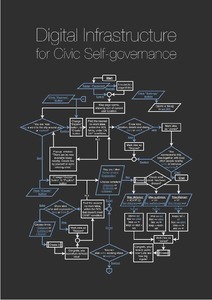 In the beginning of new century, on the wave of ICT pervasion collaborative urban design was expected to boost, but digitalization of established practices was far to be a cure-all solution. Many successful planning systems eventually discredited themselves in the face of challenges of 21st century: to recognize broad public as an equal actor in the process of decision-making; to revise notion of value in a changing economic and political reality; to take into consideration informal manifestations of urban life; to process, interpret and use overwhelming amounts of data in a legitimate way. Effective comprehensive solution for these challenges does not lie in neither of existing fundamental planning paradigms. Hypothesis behind this work is that it can naturally emerge, based on self-organizing capacities of humankind accompanied with technological innovation. As we witness success of self-organizing online communities operating in the reality of shared economies and urban commons, we need to take part in the design of new digital infrastructures, that would facilitate the emergence of new communities that would better serve our common needs and aspirations. The first aim of this work is to theoretically describe technological artifacts, that are needed to facilitate the emergence and becoming of bottom-up urban planning initiatives. Technology can play crucial role, helping us to reflect on our society, to identify convergence amongst our needs and wishes, to inform us about potentials for local cooperation and to facilitate the process of collaborative design and decision-making. The second, practical goal, is to implement prototypes, test them in the real life, analyze results and iteratively develop further.