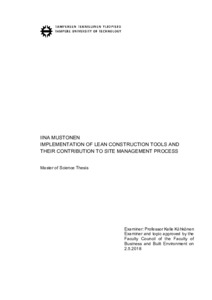 The objectives of this thesis were to study for Fira Oy, what takt planning process is like in an interior work stage of an apartment building, and what kind of problems appear in its implementation. Because takt production is different from traditional procedures, the demands it sets for site management process were studied. Contributions of several digital tools to a site management process were estimated. Research methods were literature review and a case study, which contained semi-structured interviews and production monitoring.

Theoretical part introduces lean construction and its background. Takt planning and takt control were studied, and the concept of flow was researched from both production and knowledge management point of view. The case study focused on a case site, in which takt planning and several digital tools were implemented. Interviewed people were chosen to represent different work groups, and they were asked questions related to the takt schedule and digital tools. Production was observed by monitoring, if the works were completed due the schedule, and if the data collected by digital tools met the expectations. If there appeared to be differences, their causes were found out.

Takt schedule problems in production were drying times, logistics, incentives and conflicting revenue logic, faults in the schedule, partial implementation, education and communication, contracts, resources, faults in structural design and accidents, absences and other unpredictable factors. Earlier integration into plans and contracts, better planning, education and communication, risk analysis and co-operation with subcontractors and suppliers are recommended solutions for these problems. Traditional site management processes were noticed to be inappropriate for takt production in cases of meetings, model work timing and frequency of work area acceptances and inspections. They should be developed by both contents and frequencies. Digital tools were experienced mostly useful, and they are recommended to be a part of site management. Some shortages were found in digital systems and their features, and they are proposed to be developed.