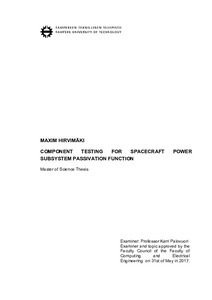 The amount of space debris has been increasing since the beginning of the space age. Unmanned spacecraft has energy storing components on-board which may pose a risk of causing the fragmentation of the spacecraft after the end of satellite lifetime. In order to mitigate aforementioned risks the spacecraft must be passivated at the end of its mission. In this thesis rationale to perform passivation is presented and several example methods to achieve passivation are listed and defined. Components with which the passivation can be achieved are introduced, detailed and compared. Due to long life-time data being unknown for relays and semiconductors temperature based test parameters are proposed to the aforementioned components. Additionally due to unknown high-voltage behaviour of bypass switches, parameters for switching test are proposed. A detailed test setup for semiconductor portion of testable components was created. A miniature test setup prototype based on the full-scale semiconductor test setup was built and a low number of commercial grade diodes and MOSFETs were tested using the built setup. In order to evaluate the possibility of the parameter measurements using the designed and built setup, the measured results were compared to the values present in the datasheets of the tested components