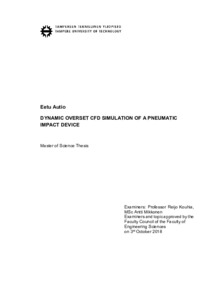 Down-the-hole drilling is a percussive drilling technique where typically pneumatic down-the-hole hammer is used to produce stress waves to crush overburden and rock. Down-the-hole drilling is especially applicable in drilling deep holes, such as geothermal wells and water wells, in hard and medium hard drilling conditions. Other common applications for down-the-hole drilling are blast hole drilling in mines and quarries and construction piling.
Design of down-the-hole hammers has been based on analytical and semi-analytical models and experimental testing. The purpose of this thesis is to investigate the possibilities of computational fluid dynamics in designing of geothermal well and water well hammers using OpenFOAM software and its overset grid functionality. With overset method, separate grids can be placed on top of each other and information between grids is interpolated. This simulation technique permits arbitrarily large determined or undetermined object movements inside the computational domain which is hard with other types moving mesh techniques. Flow inside the down-the-hole hammer is compressible and transient. Piston movement inside the hammer is pressure-induced.
In this thesis, a simplified axisymmetric grid was used for the down-the-hole hammer and with two separate simulation approaches. In the first simulation approach the clearances between the moving piston and the walls of the down-the-hole hammer were meshed with high-resolution grid. However, this approach was not successful because the overset grid could not be made robust in parallel computation when the walls of the piston and the hammer were near. In second simulation approach the hammer walls near the piston were replaced by porous media zones to remedy the problems caused by overset grid. With this technique the problem from the first simulation approach could be avoided and grid cell size could be increased in the clearances.
Piston movement was simulated with porous media technique by giving the piston a 5 m/s initial velocity. However, given velocity was too high, and piston collided to the upper pressure chamber. Pressure, temperature and flow velocity data for the down-the-hole hammer were acquired, which would have been hard without simulation. Several observations of flow behavior were made which will require further studies. For example, it was noted that outflow of the hammer develops to transonic velocity producing mass flux and temperature fluctuations.