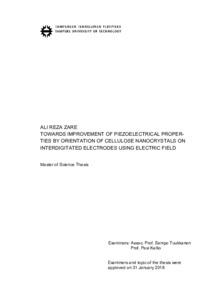 The piezoelectricity of cellulose nanocrystal (CNC) can be enhanced by orientation of CNCs. Unidirectional CNCs are obtained through time consuming mechanical or combination of mechanical and electrical methods. This state-of-the-art thesis effort uses currently electrical method as a repeatable, efficient and instant CNC orientation method. For this, multiple Au interdigitated electrodes (IDEs) were fabricated. Orientation was carried out by applying electric field between the fingers of IDE and incubation of aqueous dispersion of CNCs. For optimization purpose, several IDEs with different width and spacing between the fingers were fabricated. These IDEs were used to measure the piezoelectric sensitivity as well. The electrodes were deposited through photolithography process and lift-off by e-beam evaporation of 50 nm Cu and 100 nm Au on Polyethylene Terephthalate (PET) substrate. Prior to the deposition of Au, 3 nm Cr was deposited as an adhesion layer on PET. Final results were taken from Au IDEs since the stability of Au was better than Cu against applied electric field.
The piezoelectric sensitivity measurements were implemented using a mechanical device known as shaker. Average generated charge by bending IDE sample before orientation of CNCs was 2.58 pC/N. This unexpected initial output is due to the change in capacitance by bending the sample.
A 10 µL drop aqueous dispersion of CNC (0.023 w-%) were incubated on active region of IDE with a micropipette. Provided uniform electric field with frequency of 1 MHz and 10 Vpp between the fingers of IDE. No charges were obtained during piezoelectric measurements. This proves that uniform electric field induces a dipole moment cancellation between CNCs that results in initial charge cancellation of bare IDEs.
CNC orientation using non-uniform electric field was performed to create so called dielectrophoretic trapping forces to gather and align the CNCs into the electrode gaps. By keeping minimum DC amplitude at -1 V, different positive DC voltages were tested to the applied 1 MHz frequency, in parallel to the incubated CNCs.
Best results were obtained from 5 µm width and spacing between electrodes of IDE-CNC sample. Setting an DC of +2.5 V and -1 V to the applied electric field, 0.78 pC/N output charge was measured. This value increased to 1.25 pC/N by increasing the DC signal to +3 V to the applied 1 MHz frequency, keeping negative DC voltage constant. Deterioration of electrodes was observed by further increase in positive voltage.