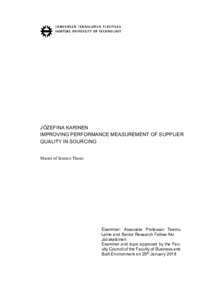 This research was conducted for a case company, which had a need for quality improvement of the suppliers. The problem was the lack of accurate measures that would monitor the supplier quality in the sourcing department. The current quality system in place was not enough to assure good quality products reaching workshop area. The processes were in need of being redesigned.
The objective of the research was to develop measures for supplier quality to be used by sourcing representatives. The research in this thesis is a case study, where multi-method research approach was used. The empirical part of the study focuses on two areas, which are the definition of supplier quality from sourcing point of view and ways of measuring it. Defining supplier quality was done based on the literature review, as well as extensive interviews held within the case company and through benchmarking. These practices resulted in identifying the key quality factors of sourced, which were timeliness of deliveries, conformance to specifications and working as expected. The supplier claiming process was identified to have an effect on solving these quality issues, and hence, was redesigned. The research revealed gap in responsibility ownership, which was affecting the poor execution of current supplier claiming process. Hence, a new position – Supplier Quality Engineer was introduced to the case company structure. Each stakeholder within the supplier claiming process had the appropriate key performance indicators assigned to support maintaining the quality of suppliers. The research took into consideration the upcoming implementation of new enterprise resource planning system, so the steps of the process are supported by the tools.
The renewed supplier claiming process will most likely be implemented in the near future at the case company. The feedback gathered throughout the research process, as well as when presenting results proved the accuracy of the findings. The biggest finding of the research was the lack of the ownership of supplier quality responsibilities, affecting greatly the overall supplier quality at the case company. The recommendations made for the short- and long-term in this thesis work were found very enlightening for the case company representatives.