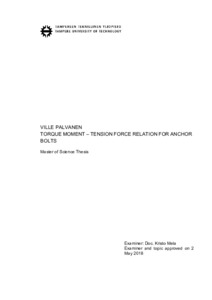 Rakennustekniikka
This publication is copyrighted. You may download, display and print it for Your own personal use. Commercial use is prohibited.

The main purpose of this thesis was to study the relationship between torque and tension for HPM and PPM anchor bolts. This was done by determining the torque coefficients and torque – tension curves. The impact of lubrication and corrosion were taken into account.
There is always some scatter in achieved preload. Scatter in friction, accuracy of tightening method, tolerances and operator skills are some of the factors that affects to the preload accuracy. Because the scatter, the minimum and maximum tightening torques are typically given by the manufacturers.
Torque coefficient describes the torque – tension relation and is determined experimentally. It includes things like the friction and is made to simplify and reduce the number of factors in joint calculations. But like preload, there is always some scatter in torque coefficient even when the bolts are from the same lot.
Tightening method selection should be based on cost optimization and circumstances. Highly accurate method can reduce the number of needed bolts or decrease dimensions but will be more expensive. It should be also decided how accurate method is needed. The costs increase unnecessarily if the high accuracy is chosen when it is not needed.
Test set-up included a bolt, two nuts, two washers, two column shoe base plates and two steel plates. The measurements were made by using hydraulic jack, hydraulic pump, torque wrenches and torque multiplier. Two lubricants were used, one is considered as a low friction lubricant and the other is considered as a basic lubricant. Some of the bolts were left outdoors to be exposed to the corrosion. Improvements to the tests were made gradually when new problems occurred.
The torque coefficient was 0,21 to HPM bolts. The results for PPM bolts are not public. The lubrication decreased, and corrosion increased the coefficient value. Corrosion had a major impact to the torque – tension relation. The bolt size didn’t affect the torque coefficient, but it had a significant impact to the torque – tension curve. The curve analysis was easier to make with smaller bolts since the torque multiplier increased the scatter with larger bolts.