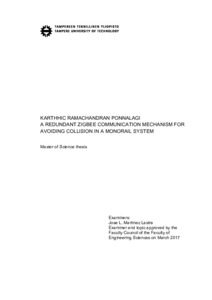 The safety of machines plays an important role in an automation system. The accident of transportation system leads to delay or complete blockage of production which leads to loss. In time-sensitive production, it could lead to a defective product. To avoid such accidents collision avoidance mechanisms where implemented. The collision avoidance mechanisms are made of using sensors and by sharing status between themselves.
The monorail system is an overhead transportation system which consists of a rail in which few monorail carriers run. The rail is a closed loop and the carriers run in one direction in the rail. The carriers are controlled by the floor programmable logic controller (PLC) which orchestrates the movement of the carriers through the primary Wi-Fi communication between them. The main task was to implement a collision avoidance mechanism which should act when the Wi-Fi communication between the carrier and the floor PLC fails. This collision avoidance mechanism prototype is done using internet of things (IoT) devices.
The IoT is a fast-growing technology with a purpose of connecting any physical devices into a network. In that network the data from the physical device can be processed or shared with similar devices.
In this thesis the background information of the monorail transfer system is studied, and the major components used are explained. The different methods of wireless communications were checked, and a suitable wireless communication is chosen for the collision avoidance system. Using an IoT device the PLC of the monorail carrier is connected to IoT network which is used to communicate between other carriers. By communicating using the secondary IoT network, the carriers share their position information which results in collision avoidance. In this case not only avoiding collisions but also the carrier is moved to the maintenance position by the IoT device when it blocks the path of the neighboring carrier.
A prototype was built and it was tested on the test platform, and the necessary changes were made to make it fully functional. A simulator is created to show the working logic after the test platform became unavailable. The IoT collision avoidance mechanism can also be used for controlling the carriers when the floor PLC is down or as a test platform to trigger the functions of the carriers. With some additional PLC programs for secondary control this mechanism could also be used as a secondary control to the floor PLC for the carriers.