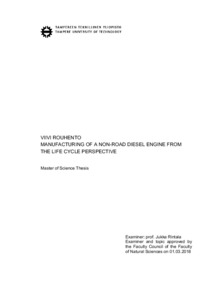 The goal of this study was to identify and quantify the environmental impacts produced during the life cycle of a tractor’s diesel engine with the life cycle assessment (LCA) method. Furthermore, the goal was to recognize which life cycle stages impact the environment the most. Opportunities to reduce environmental impacts were also examined. The focus of this study was on the manufacturing of the engine due to the intended audience of the study, the engine manufacturer AGCO Power.

LCA of the diesel engine was performed using SimaPro software and the chosen environmental impact method was the ILCD Midpoint 2011+ method. The examined environmental impact categories were climate change, eutrophication (land, fresh water and ocean), acidification, photochemical ozone formation, ozone depletion and mineral, fossil and renewable resource depletion. The life cycle stages of the of the engine included in the study were raw material extraction and production, manufacturing, distribution, use and end-of-life stages. Data related to input and output flows of unit processes were collected from the engine manufacturer, the producers and suppliers of materials, waste handlers and the tractor manufacturer and the distributor. Some data was also obtained from the EcoInvent database and literature.