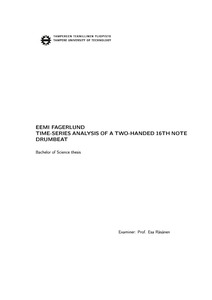 Fractals are not only beautiful mathematical constructions, but they can be found all around in nature. Temporal fractals characterize a variety of fluctuations in human functions, such as in gait, heart rate and breathing. Fractal behaviour has also been studied in music, and especially in drumming.

In this thesis we first go through the brief history of research regarding fractals in music, and then present some new findings. The fractal nature of musical fluctuations was first discovered in the 1970's, but only in the last ten years or so has its research picked up again. In 2011 fractals in rhythms were observed in laboratory conditions, and afterwards research was conducted on actual recorded music with similar results. A large-scale study in 2018 suggested that fractal fluctuations can be found in music regardless of the style or genre.

In this work we compared the fractal behaviour of a one-handed 16th note drum beat to a two-handed 16th-note drumbeat. It turns out that when both hands are working together to produce a steady rhythm as opposed to just one hand, the fluctuations from a metronome are not that fractal anymore. The long-range correlations previously found in the interbeat intervals are now replaced with clear anticorrelations. We also analysed the amplitude fluctuations of the song in question and found that the dynamic is more long-range correlated in two-handed than in one-handed playing.

Finally we discuss these results from a scientific point of view, but also from the point of view of a drummer. We try to explain these findings using knowledge and experience of the analysed drumbeat, and also from the viewpoint of musical interpretation.