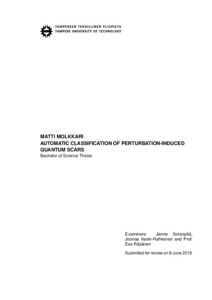 A recently discovered perturbation-induced quantum scarring phenomenon is an example of quantum mechanical suppression of chaos. The phenomenon is seen on some eigenstates of the system as quantum scars, which are remnants of the periodic orbits of the corresponding unperturbed classical system.

The phenomenon allows efficient propagation of wave packets through two-dimensional potential wells. The scarring is controllable by an external magnetic field and by manipulating the properties of the perturbations, indicating exciting possibilities in quantum transport. Exploiting this phenomenon requires knowledge about the scarred eigenstates, found among thousands of eigenstates in the systems of interest. Therefore an automated procedure for classifying the different types of scars and quantifying their abundance and strength in each system is desired.

A solution generalizable to any system is sought by approaching the problem from an unsupervised learning viewpoint, to avoid the laborious task of labeling training data in the studied systems. An integral tool utilized in this thesis is the clustering of feature vectors extracted from the two-dimensional probability density grids of the eigenstates. The feature vectors are obtained by considering local probability density histograms and by employing convolutional networks. Self-organizing maps are also utilized for forming a representation of typical eigenstates in the system.

The methods are found to perform satisfactorily if the scarring is strong enough. Weaker scarring poses challenges, particularly if the scars of the same kind are present in multiple orientations and scales. In this case the number of clusters required for adequate portrayal of the system grows impractically large. The inverse participation ratio provides a useful measure for intra-cluster scarring strength, but it is not globally applicable to the whole system.