Demonstration of Ultra Wideband Based Positioning for Mecanum Wheel Robots 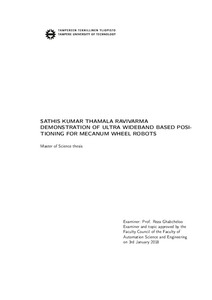 Ultra Wideband(UWB) communication have been increasingly used in indoor positioning systems to complement Global Positioning System(GPS) in indoor environments. This thesis demonstrates the accuracy and application capability of the technology in a small-scale factory environment. The factory environment consists of 3m by 3m area with designated loading areas for pallets.
The forklift type robots have forks to lift pallets and are fixed with mecanum wheels. The forklifts have to move the pallets based on the commands received through network effectively avoiding other robots and static obstacles in the area. The forklifts are 18cm by 25cm in size and have to move through the path of 30cm in width.
For positioning the robots in the environment, position from UWB is fused with onboard Inertial Measurement Unit(IMU) using extended Kalman filter. The path planner which plans from the current position of the robot to target area uses the map of the environment in OpenDRIVE format. A* planning is used to plan the path from the current position on the map to the goal. A dynamic obstacle grid is used to avoid moving robots in the vicinity of the robot.
Pure pursuit algorithm which selects a point on the path to follow is used for path following. Pallets are fixed with visual markers which are detected by the camera on forklifts. The marker detection provides the relative distance of pallets from the forklift which is used to pick and place the pallets. All these individual systems are integrated using state machines for seamless task execution. Four forklifts were effectively able to move pallets between loading areas without colliding.