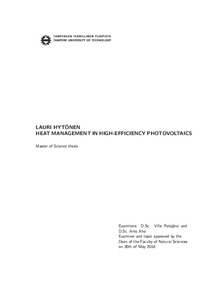 Multi-junction solar cells are one of the most promising technologies for solar energy production in both terrestrial and space applications. Highest conversion efficiencies among all solar cells have been recorded by III–V multi-junction solar cells under concentrated sunlight. Concentration of light improves the overall efficiency of the solar cell, but also increases the heat load, which has negative impact on the cell performance. In order for concentrated photovoltaics to remain as a competitive alternative for solar energy production, adequate heat management must be implemented.
In this thesis, a thermal simulation model for concentrated photovoltaics is developed. The key aspect of the model is the incorporation of concentration and temperature dependency of efficiency of the simulated multi-junction solar cell. By defining the temperature dependency of the efficiency, we can study the impact of the temperature on the performance of a single cell and the overall performance of a panel assembly. The model is validated by comparing data acquired from laboratory measurements with data acquired from the simulation. The model is then extended to study different cooling scenarios.
Five different scenarios were investigated on a panel level: passive cooling, active cooling, cell miniaturisation, concentrated photovoltaics in space conditions and sub-bandgap energy photon filtering. The model proved to be a useful tool in predicting the behaviour of different cooling scenarios. The results were predictable and in agreement with the theory. The model offers valuable insight to different cooling scenarios by providing numerical information about the power output at single cell and panel scale. This information could be used e.g. for evaluating the payback period of the capital invested in the cooling system. The model presented in this thesis can easily be extended to study different scenarios by either varying existing parameters or by adding new parameters or boundary conditions.