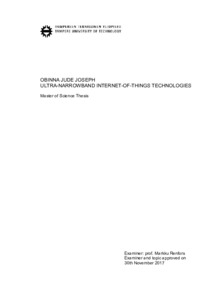 Low Power Wide Area Networks (LPWANs) are a class of wireless network technologies that enable low power consumption and wide area coverage. It can utilize licensed or unlicensed frequency bands and also open or proprietary standards, such as Sigfox, LoRa, NB-IoT, or EC-GSM-IoT.
Ultra-Narrowband (UNB) Internet-of-Things (IoT) is usually a technology deployment supporting low-rate sporadic communications and operating over very narrow spectrum channels, usually less than 1 kHz, in order to attain long distance links, normally 5 km in urban or over 25 km in rural or suburban areas in order to gain noise-free, undisturbed and high-quality data links between transmitter and receiver, Sigfox is an ultra-narrowband LPWAN technology for IoT applications, and it operates on the sub-GHz license-free ISM frequency bands depending on the region. In the United States it operates at frequencies around 902 MHz and around 868 MHz in Europe.
LoRa is another LPWAN technology, supporting similar application scenarios as Sigfox and operating in the same ISM bands. However, LoRa it is a spread spectrum technology operating with wider frequency channels. Narrowband Internet-of-Things abbreviated as NB-IoT or LTE-CATM1, is a LPWAN technology which came out as part of the third Generation Partnership Project (3GPP) release 13 standards in the second quarter of June 2016.
This thesis focuses on the random-access schemes for UNB-based IoT networks. Due to receiver synchronization issues in UNB communications, two-dimensional time-frequency random access protocols are a natural choice for UNB systems. As a case study, the throughput performance of a Time Frequency Asynchronous ALOHA (TFAA) protocol is evaluated in a LPWAN UNB uplink scenario using Matlab simulations.