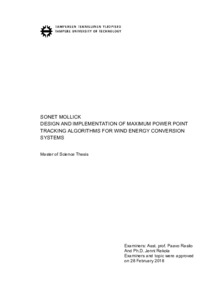 The thesis is carried out for the wind energy conversion development project at Laboratory of Electrical Energy Engineering of Tampere University of Technology. The main purpose of the thesis is to design four different types of maximum power point tracking algorithms (MPPT) in Matlab Simulink and analyze them based on their performance for the variable speed wind energy conversion systems. Since wind speed continuously varies in wind turbine systems, the MPPT algorithms are essential to maximize the energy yield from the wind at or under rated wind speed. Variable speed wind energy system can follow the wind speed variation and generate the maximum power under the normal operating condition at lower wind speed. The efficiency of the variable speed wind turbines relies on the performance of the maximum power point tracking techniques. However, for a specific wind speed there is only one available rotor speed which is responsible for maximum power yielding known as maximum power point (MPP). In the thesis all four MPPT scheme’s theoretical backgrounds are explained and implemented in a simulation model. For all the control methods we need some input data such as wind speed, turbine characteristics, optimal power coefficient, and turbine power. In the tip speed ratio control method, precisely measured wind speed is required for the input of the MPPT controller and then the rotor speed reference is estimated from the given turbine characteristics and tip speed ratio. The simulation results show that it is the fastest control strategy to achieve the MPP but the accurate wind speed measurement is challenging. The optimal torque control and hill climb search control do not need any measurement of the wind speed but require measured turbine power. In the same manner, for the simulation of optimal torque control method, it is required to have the knowledge of optimal power coefficient which shows the optimal turbine power corresponding to the rotor speed. Eventually the most advanced method known as Modified hill climb search algorithm is simulated where turbine characteristics and wind speed measurements are not required. The thesis shows that every control method has their own pros and cons. For example, settling time for the optimal torque control and hill climb search control methods during the wind speed steps is about three times longer than with TSR control. Additionally, it is shown in simulation how the rotor speed fluctuation is eliminated with the help of Modified hill climb search algorithm. Finally, in the thesis a new concept called predictive MPPT is presented to improve the efficiency of the conventional MPPT algorithms.