Modelling and Controlling Board Moisture and Temperature in a Corrugator 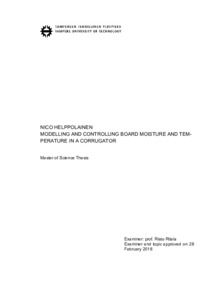 The costs from the boards used as a raw material are the biggest individual source of costs in the corrugated board manufacturing process. The manufacturers continuously aim to reduce raw material costs, which leads aiming to reduce waste production and at the same time to minimize the basis weight of liner and fluting boards. Because of the abovementioned, the industry has been showing an increasing interest in moisture and temperature controls.
In the theoretical part of the work, the corrugator is introduced from a process control point of view: what can be measured and controlled on the machine, and what kind of effects they have. The temperature is found out to be important for successful gluing while moisture has a major impact on the warp. Too dry or too moist corrugated board cause problems in converting. The optimal moisture and temperature levels are found out to be grade depending.
The impact of preheating into moisture and temperature in a single facer is researched via trials held in Spain. Based on the trials, a simple static process model is generated. The reliability of the model is validated by using it for predicting in a real process environment. The moisture prediction is found to be accurate but challenges are faced with temperature predicting.
A static model-based control is implemented for controlling liner moisture and temperature in a single facer. The control is executed by adjusting the positions of the preheater wrap arms. The motor actuated wrap arms can be moved by a limited speed. The performance of the control is evaluated by simulations which reveal that the control is very robust for model error. The control offers a significant potential on stabilizing moisture and temperature.