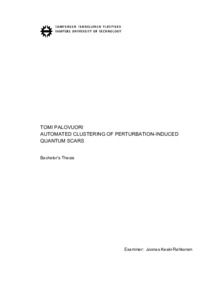 Some of high-energy eigenstates of a highly disordered quantum system are strongly scarred by periodic orbits of the unperturbed classical counterpart. Detecting these scars has thus far relied on a researcher to go through individually thousands of solved eigenstates of a perturbed system by eye. However, the probability densities of the eigenstates can be seen as two-dimensional images, and the classification become an image clustering task. With a bit of preprocessing the image clustering problem is generalized for any set of scars. Utilizing a simple comparison function for calculating the similarity between any two scars a distance matrix can be calculated for hierarchical clustering.

The comparison function for scars with differing scale and rotation simply contains a comparison for each size and rotation possible in the dataset. Within the dataset received all scars are centered and bound by circles surrounded by low noise, so they can be scaled by resizing the picture and either removing or padding the outlines. Squared error is the best method of calculating the distance between scars. A weak gaussian blur greatly improves the results.

Hierarchical clustering with SciPy includes multiple clustering methods and distance metrices. Best metric for clustering the scars is calculating correlative distances from the comparison function’s distance matrix. Of clustering methods both UPGMA and WPGMA cluster correctly, but the results of UPGMA are easier to extract. Mean images can be calculated from aligned clustered images to graphically present clustering results of any number of clusters. Accurate mean images require more comparisons to be calculated but stored information from the distance matrix can be used to reduce the number of required comparisons.

Wanted classes of scars are clustered best at different points of clustering. The last three clusters for the test set include clear bouncing balls, circles and the rest. Within the rest there are noisy bouncing ball -like scars with a threshold distance of 21 and pentagram-scars with a threshold distance of 16-18. Threshold of 17 results in 9-12 classes, of which 3-4 are bouncing balls, 2-3 are circles and one is pentagrams. There are classes of quantum scars not introduced in the test set and the thresholds for those must be examined separately.

Classification from clustering must still be done by hand or alternatively a simple query-function can be used. Using simple class templates developed compare()-function can be utilized to classify scars. However, this does require prior knowledge about possible classes inside a given set. Classification of about a dozen images by hand is still significantly faster than the classification of the entire 2000 image set.