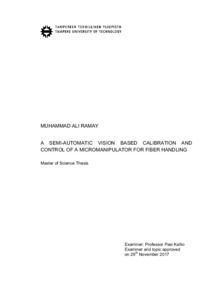 Microsystems is a topic which is under a lot of research. Many micro actuation and sensor technologies have been seen emerging in the market. This opened a gateway of development in the field of micro-robotic systems. In fixed micro-robotic systems, micromanipulation plays a key role for the handling of micro objects. It has many applications in various fields like micro-robotic industry, micro-robotic surgery, testing of micro objects and bioengineering.
To test micro objects, they have to be picked up and placed on a testbed which is a hard manual process. This thesis is a step forward in the development of a fully automated pick and place process of fibrous material. To achieve this goal a technique was established to perform camera calibration with minimal effort. It not only calibrates the camera but it also binds the micromanipulator with the camera calibration values.
This thesis presents a calibration technique which can be used with any manipulators of nearly the same design and whose actuators are equipped with closed loop sensor feedback control. Instead of large measurements, dimensioning and calculations, this thesis established a technique which uses four points to calibrate the whole system with minimum effort and calculations.