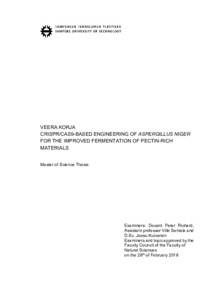 Millions of tons of pectin-rich materials, such as citrus peel, are annually discarded worldwide. Filamentous fungus Aspergillus niger naturally degrades pectin-rich materials. Consequently, A. niger has been previously engineered to convert the main component of pectin, D-galacturonic acid, into mucic acid, a value-added chemical. However, the productivity of mucic acid from pectin-rich materials in A. niger is not yet high enough for the production to be cost-effective in industrial scale. Strains can be modified in order to increase the yield, the titer and the productivity of specific compounds through metabolic engineering that uses genome editing tools, such as the highly efficient CRISPR/Cas9 system. Unfortunately, the CRISPR/Cas9 system has only been applied to filamentous fungi for a couple of years and lacks a standardized method for A.niger.

The aim of this study was to improve the production of mucic acid in A. niger from pectin-rich materials through metabolic engineering. As a consequence, an efficient, fast, and simple CRISPR/Cas9 method was tested, downscaled, and optimized for A. niger using homologous recombination and the transformation of a in vitro synthesized Cas9 and guide RNA as a single ribonucleoprotein. The developed CRISPR/Cas9 method performed with 100 % replacement efficacy when a single gene was replaced with heterologous genes. Method was studied for multiplex genome editing and succeeded in replacing 2 or 3 target genes by heterologous genes. This was notably the first time, RNP-mix-based method was used and multiple gene replacement were performed simultaneously in A. niger. In addition, the method is compatible for 96-microwell format in high-throughput workflows for example in robotics.
Multiplex gene editing was performed in A. niger in order to improve the production of mucic acid: a gene encoding for pectin-catabolism-repressing transcription repressor protein, gaaX, was replaced by an enzyme converting galacturonic acid into mucic acid, while this replacement was combined with the patented pathway. In the 5-days-lasting cultivations with 20 g/l citrus pectin, the new strain produced 12.05 g/l of mucic acid while the old strain produced only 7.31 g/l of mucic.