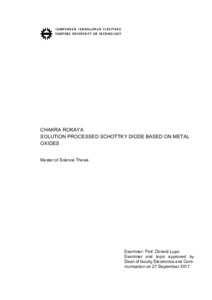 Metal oxides are of increasing interest in electronics because of their unique characteristics. They are used as semiconducting interfacial layer between the metal contacts and as active materials in many electrical components like thin film transistor, diodes, and field effect transistors. They have number of advantages like relatively low processing temperature, high carrier mobility, good electrical properties, good transparency, and large area uniformity. The precursor materials required to make solution processed semiconductor are cheap, easily available in the market, and easy to handle and process.
In this thesis, we attempted to fabricate a Schottky diode based on solution processed metal oxide. The fabricated Schottky diode will be used in a rectifier circuit as low series resistance and highspeed switching device. The input AC signal to rectifier unit will be converted to DC and transfer power to the load circuit. Initially, different metals like aluminum, chromium, copper, gold, silver etc. were studied, analyzed and fabricated on the glass substrate. UV plasma and oxygen plasma surface treatments were explored to enhance film formation properties. Both lateral and vertical structures were studied. Vapor deposition technique was performed for deposition of metal contacts.
The electrical characterization was carried out to find out whether the metal behaves as a Schottky or Ohmic contact to the metal oxide. Lateral and vertical structures were characterized with potentiostat, semiconductor analyzer and temperature stage at different biasing voltages. The measurements shows that all metals behaved more or less as Ohmic contacts. Aluminum and chromium gives Ohmic behavior at all temperatures. Some metals like chromium, copper, silver, gold etc. become injecting when the temperature rises. No true Schottky contact could be identified although this would be predicted according to the energy levels of the semiconductor and the work functions of the metals. Diode were fabricated using a variety of different parameters such as substrate treatment procedures, precursor, sintering method, and multi layer spin coating. The thickness of semiconducting layer and metal deposition thickness also varied during experiment. Unfortunately, no good vertical diodes could be fabricated. Due to the high current, it is believed that the devices are diode short-circuited because of pinholes. This is confirmed by microscopic images showing non-uniform layer, holes, cracks, and other defects.