Simulations of a Cooling Water System 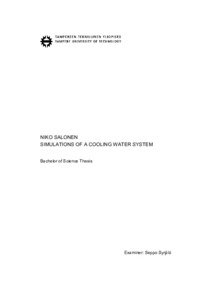 The thesis studied the cooling water system of a piston engine. The purpose of the study was to investigate the influence of pump installation on the functionality of a temperature control valve. The temperature control valve was connected with a feedback pipe. The temperature control valve and the feedback pipe are important components in the cooling water system. Their function is to control the temperature of the cooling water of the engine.
Computer software simulation was used as a research method. Four different cases were discovered in the study. The only changes between the cases were the pump installations. The first case was the reference case (Case A) and the second was the problem case (Case B). Third (Case C) and fourth case (Case D) were solution proposals for the observed issues in Case B. In Case A, the circulating pumps of the system were connected in parallel. In Case B, the circulating pumps were connected in series. In simulations, the closing position of the temperature control valve varied and the situations between different cases were compared.
The results show that the pump installation has a clear influence on the functionality of the temperature control valve. In Case A, the flow direction in the feedback pipe stayed in the right direction. The series connection of the circulating pumps in Case B caused the turning of the flow in the feedback pipe. Case C was a combination of Case A and B. The results of Case C showed that it worked better than the system of Case B. The results of Case D were more similar with Case A than the results of Case B or Case C.