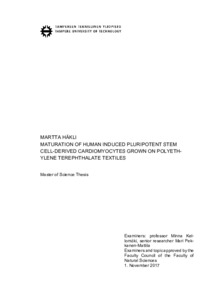 Human cardiomyocytes (CMs) have been difficult to obtain due to invasive heart biopsies and poor long-term survival of the cells, limiting their utilization in research of cardiac diseases. Human induced pluripotent stem cells (hiPSCs) provide an unlimited source of human CMs that can be utilized in developing patient-specific disease models and tissue engineering applications, and in drug screening. However, when hiPSC-derived CMs (hiPSC-CMs) are cultured in in vitro conditions, they are developmentally immature compared to adult human CMs, which is why the collected data cannot be directly related to the actual disease. Many methods have been developed to improve the maturation state of the hiPSC-CMs, including different kinds of topographical and chemical cues, but none has succeeded in producing CMs comparable to the adult human CMs. The aim of this study was to determine would culturing hiPSC-CMs on polyethylene terephthalate (PET) textiles affect molecular and functional maturity state of the cells in addition to structural maturation.
hiPSC were differentiated into CMs using small molecule differentiation and the resulted CMs were sorted via magnetic-activated cell sorting (MACS) and plated onto gelatin-coated PET textiles for 11-12 days. Control cells were cultured on gelatin-coated coverslips. Molecular maturation was evaluated by comparing the relative expression of cardiac type troponin T (TNNT2) of target and control cells via qPCR. Functional maturation was evaluated by comparing calcium handling properties of the target and control cells via calcium imaging. Structural properties of the target and control cells were compared via immunostaining and fluorescence imaging. The cell shape, sarcomere length and orientation were analyzed from the images with CytoSpectre software.
Culturing hiPSC-CMs on PET textiles seemed to induce molecular, functional and structural maturation of the cells. TNNT2 expression increased 3.35-fold in hiPSC-CMs grown on PET textiles compared to control. hiPSC-CMs grown on PET textiles exhibited less abnormalities in calcium kinetics, and had faster removal of cytosolic calcium and increased beating frequency. Also, cell shape and sarcomere orientation were improved. On the other hand, release of calcium into the cytosol was slower in hiPSC-CMs grown on PET textiles, and sarcomere length of the cells was not affected and was lower than that of observed in adult human CMs.