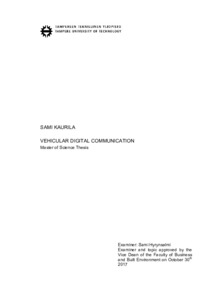 The vehicles such as cars, trucks and buses were once fairly simple from the electric perspective. The internal combustion engine needed originally very little other electricity than spark to operate. The ever-tightening regulations, especially from emission perspective, have leaded the development to complicated electric systems, most of which currently still operate onboard individual vehicles.
Currently the modern vehicles carry dozens of electronic control units onboard them. These communicate with each other over data bus system, CAN being the most widespread of them, by exchanging digital data packets. Pressing down the accelerator pedal on a modern car triggers an electric data exchange in the system where one of the possible outcomes is the fuel being fed into the engine. This depends on how the software based steering is set up; which are the included conditions that must be fulfilled. Furthermore there is no direct, mechanical link between the pedal and the fuel fed into the engine. These kinds of electric inputs currently come from the driver in the vehicle, but could come also wirelessly from outside.
The onboard digital data communication as above exists already. Something that is emerging as we speak at the end of 2017 is the inter-vehicular communication. This brings in the discussion the wireless technologies such as future 5G mobile networks and Dedicated Short Range Communication (DSRC). In the future the data will no longer be relayed only onboard an individual vehicle, but also between vehicles and infrastructure. The umbrella term for this communication is Vehicle-to-everything (V2X). These technologies enable number of applications such as autonomous driving, platooning and automatic emergency braking, only to name a few.
In this study, we review the state of the art in the field of connected vehicles. We also create and test a software function for climate control system of a bus thus providing a practical example of how we can control a real life phenomenon such as air temperature with SW steering.