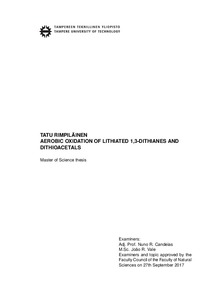 Lithiated compounds are well known to be reactive towards oxygen. The initial studies conducted at Tampere University of Technology had shown that upon exposure of 2-aryl-2-lithio-1,3-dithianes to air, three equivalents of 1,3-dithianes undergo an autooxidative condensation forming previously unreported products in good yields. Since only cyclic 2-aryl-1,3-dithianes were previously studied, the objective of this thesis was to study whether the scope of the oxidation reaction could be extended to acyclic lithiated benzaldehyde dithioacetals and 2-alkyl-1,3-dithianes. The study was performed by preparing the dithioacetals and 1,3-dithianes and then oxidizing the lithiated substrates. The results of the oxidation reactions were evaluated by determining the structures of isolated products by using NMR and mass spectrometry and then comparing the relative yields of the products.

The aerobic oxidations of lithiated benzaldehyde dithioacetals derived from primary, secondary and benzene thiols yielded alpha-sulfide ketones and orthothioesters. The observed products were analogous to the products obtained from the oxidations of 2-aryl-2-lithio-1,3-dithianes, which indicated that the same autooxidative condensation mechanism operated. When lithiated n-butylthiol dithioacetal was oxidized, an excellent 97% yield of alpha-sulfide ketone and 72% yield of orthothioester was obtained. When dithioacetals derived from secondary or benzene thiols were used, the observed yields decreased significantly, which was likely due to increased steric hindrance. The oxidation of tert-butylthiol dithioacetal afforded a thioester in 62% yield, which suggested that the oxidation mechanism proceeds by forming an initial thioester intermediate. Bulky tert-butyl probably prevented further condensations from occurring. Dithioacetal derived from benzylic thiol was observed to form an unexpected product upon treatment with n-butyllithium. This could be a result of an anionic rearrangement, however, further studies are required to confirm the observation.

Oxidations of 2-alkyl-2-lithio-1,3-dithianes afforded 1,2-diketone derivatives where the other carbonyl was still protected as a 1,3-dithiane. While the yields of the derivatives were poor, the observed structures provided more information about the mechanism of the oxidation. It is likely that the obtained products resulted from an attack of excess lithiated 1,3-dithiane to the thioester intermediate. In contrast to 2-aryl-1,3-dithiane, the reaction halted after after the first condensation because the formation of a lithium enolate likely competed with the second condensation. As with tert-butylthiol dithioacetal, the oxidation of lithiated 2-tert-butyl-1,3-dithiane was observed to halt at the thioester intermediate, which was likely due to similar steric reasons. Despite the high value of 1,3-dithianes in synthetic chemistry, the work described herein presents an insight into one of the main limitations in using of 2-lithio-1,3-dithianes, namely previously reported inconsistent yields and formation of byproducts.